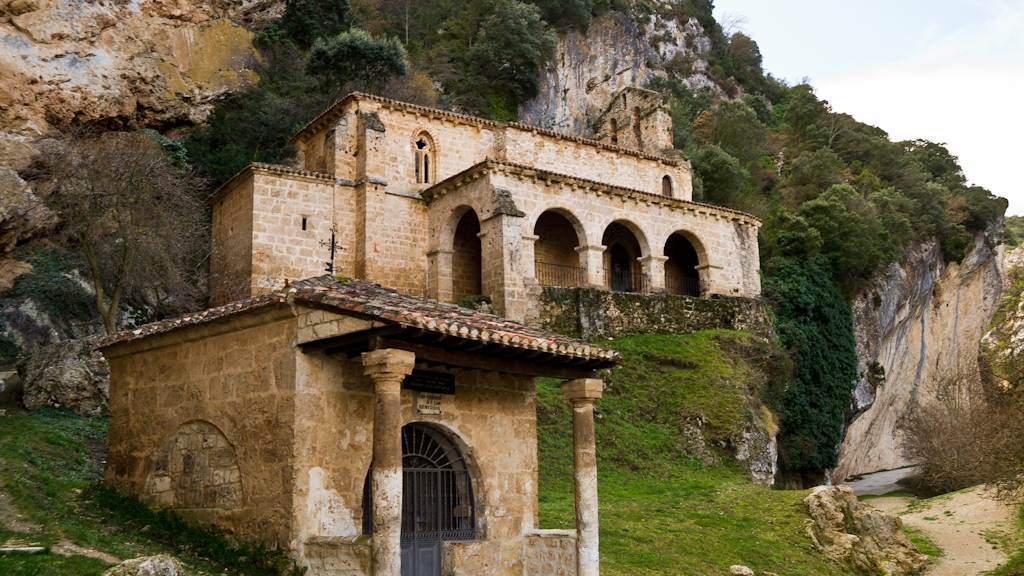 In December I was in Burgos, and the last day before going back to Cullera I made a trip by the north of the province with some friends. It was a one-day trip that came out of nowhere the previous day, as a recommendation of a friend’s relative, in which we all agreed. The destination was the Obarenes Mountains – San Zadornil Natural Park, in the frontier between Burgos and Álava.

The day started without many clouds. Something to thank since it had been raining all the week long.  Moreover, the temperature wasn’t so bad for Burgos in December. Thus, we took the car and once and for all, and we headed to there, along the road in north direction with some stops halfway.

Bridge above Molinar River in Tobera

One of the stops we did was in Tobera, a little and beautiful town belonging to Frías that has a nice hermitage and a river with waterfalls along its riverbed. The hermitage, at the foot of the mountain seemed quite beautiful to me. What to say about the town? A place belonging to the past whose river and waterfalls make it looks beautiful. After this little stop, we continued to Herrán, a place in which we parked to start our route across the Natural Park.

Horses grazing in the Park

Landscape when going up

Landscape from one of the mountains

The Obarenes Mountains Natural Park it’s a park where the range of Arcena runs and in which towns like Herrán, San Zadornil or Ribera are placed. In it, it’s possible to make several signed routes. Our main idea was to go through it, go around the mountains and go back. The plan was later modified.

We started our route between beautiful gorges and a river which ran as a rapid to end in a meadow at the entrance of Ribera, where several horses were grazing. I really wanted to caress them, but due to they were eating and they greatly overtook my size, that idea faded away of my mind. Once we passed the fence of the horses, we got to Ribera, a little town practically abandoned, in which a ruins and a little abandoned church were placed. It was the place we chose to make a little stop for having a lunch before keep following our route up the mountain before of ending in a little town, with some tables as a picnic. That was the chosen place to eat, where we got the visit from a cat that looked like searching for our food.

Once the food was finished, we followed our route and then we noticed that we didn’t know how to follow it. The option of going back was there, but we didn’t want to do that. We knocked to a door of one of the houses where somebody seemed to live in, but there was no answer. So, after take a look to the map and discard one of the options, we chose the one that was left. There started the adventure of knowing where we were. Looking to other of the maps we decided to start what we thought it was the shortest way. The said way ran through two mountains. The up way was the worst one, since we were not sure of going in the right way. What we were following was the trail which the water had left in previous days.

We managed to get to the top, with some exhaustion, a lot of stops and occasional swearing. Then we realized that it was worth it, because we could gaze at a beautiful sight of the range. The descent was a cinch, and after a little bit more than an hour, we reached the car, where two hours of driving were waiting for us, to reach Burgos.

I can say that that afternoon I slept like as never before, and that was a good thing, because I took all my things at night, I took Kima into the car and I prepared to drive during six hours to Cullera.